Over the last few years, I’ve realized just how much December 31st feels old and January 1st feels brand new. The first day of the year feels like a blank piece of paper, ready to be turned into a drawing. The next paper turns into a slightly better drawing, and the next, and so on. I resonate more with an empty IDE or directory on my computer, but the concept is similar. For some folks—like myself—a blank page is motivation to create.

With relation to project work, it doesn’t make sense all the time to try to copy as much existing stuff as possible. Sometimes, with newer tools, it makes sense to start completely fresh. For example, we had a client earlier last year that asked if we could reuse as much CSS as possible from a previous iteration of their project. We didn’t end up using it because we’ve recently very strongly taken to the Tailwind CSS framework in our practice, which only requires configuration to generate thousands of classes that are ready to use. (For performance reasons, we purge classes not used in production when that is built. This website is built the same way.)

I had another project several years ago that turned into an unmitigated disaster. We were tasked with trying to clean up work that another agency had done on a WordPress site for the client. The client was dissatisfied because the agency literally hard-coded everything in pages and posts instead of using structured data. Looking back at my fairly junior self, it made much more sense to start that over rather than trying to rescue what we had inherited. The client berated us on an almost daily basis. After many overtime hours, including weekends, they eventually fired us too. The timeline was too tight and there was too much cleaning up to do. If I could go back and change it, I would have advocated more for starting completely fresh. It might have been a bit more possible and more successful in that situation. I don’t think I had much of a say in the matter at the time though. 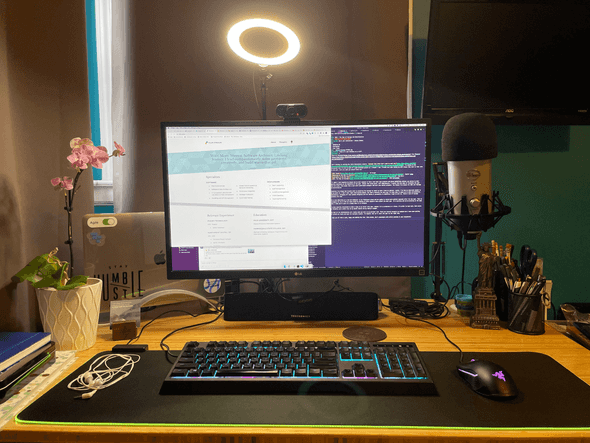 I’ve already acted out part of one of my themes today by being determined to clean up my work area and get a nice photo of it. (Notice my microphone; that itself isn’t new, but thanks to my folks, I have a new stand and shock mount! ❤️ My orchid is also happy as a clam so far.) I cleaned up the clutter and did some spot cleaning on my desk mat, the dirt on which was very evident in previous photos.

If you’re anything like me, you’ve been slacking on chores for the last few months, out of sheer depression or by throwing yourself at your work like I did. You can change that by tackling a little bit at a time. Have a huge pile of laundry to fold? Spend half an hour folding as much as you can per day until it’s all folded. Need to edit a hundred photos? Time box it to an hour or so and edit as much as you can. However, sometimes it makes sense to start fresh. If you think you’ll never wear a shirt again, throw it in a bag to be donated. If you have dishes or cups you don’t use anymore, find other uses for them or recycle them.

I’m determined this year to get rid of anything I haven’t used in the last few months, hopefully through donations or sales. If something is not in great shape, it will likely go in the garbage or recycling. My basement is full of stuff I haven’t used in years. What I should do is go down there every week or so and decide, from a small pile of stuff, what to keep and what to get rid of. Eventually, the basement will be clean enough to refinish! If we can get to that point, I can blog about how we’re gonna build an awesome new office down there. This office is too small and noisy ever since my husband started working from home! That will be a welcome fresh start.

What about you? What fresh starts have you initiated? When was a time that you should have taken a fresh start?